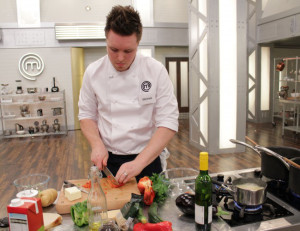 A previous student of Lane End’s Executive Head Chef is whipping up a storm in the final of MasterChef: The Professionals.

Steven Edwards, 26, was originally recruited as an apprentice by Mike Day, the Executive Head Chef at Lane End Conference Centre.

Mike, who has led kitchens at some of the most prestigious hotels and venues in the country, said: “I first met Steven when I was Head Chef at the Burnham Beeches Hotel in 2003.

“Steven applied for a chef apprentice programme and his passion and drive was clear from the moment I met him.”

Steven, who is currently based in Horsham, West Sussex, has survived four intense weeks of the MasterChef: The Professionals competition.

Having secured his place in the final, he must now do battle with three other chefs to claim the overall MasterChef: The Professionals title.

Mike said: “MasterChef is notorious for its difficult challenges; Steven will have to pull out all the stops this week to impress the judges but I am sure he can do it.”

MasterChef: The Professionals final starts tonight at 8.30pm on BBC 2.

Mike is no stranger to the limelight himself. His show stopping dishes have earned him runner-up in the national Chef of the Year competition and two Rosettes at the Burnham Beeches Hotel.

Here Mike and his team of seven chefs take conference catering to a whole new level.

“Whether we’re creating an informal lunch or three-course gala dinner, everything we do not only has to look good but taste out-of-this-world too.” says Mike.